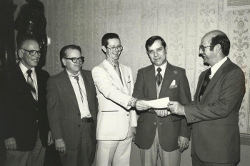 There were six presentations given during the meetings in 1948 which included Control Valves, by John E. Green, a movie, Electricity and Oil Industry, Electrical Equipment for Pipe Lines, by General Electric, Diesel Engine Supercharging by Fay Cook, Aluminum Pipe in Crude Oil Service by Francis Coryell and Pipe Line Communications by Little.

The Scholarship Committee first began in November 1955 with a letter to R.L. Langenheim, Dean of Engineering at the University of Tulsa, offering a scholarship in the amount of $350.00 for the 1956-57 school years, to the University of Tulsa College of Petroleum Sciences and Engineering. The first year committee members were J.D. Jones, T.S. Llewellyn and H.T. Chilton, chairman.

The first scholarship was awarded in 1956 to James E. Kiefer, from Wichita, KS. His application included a transcript with straight A's in engineering. There were two other applicants for the scholarship, Donald H. Stares and Robert A. Wattenbarger, and both Tulsa High School graduates.

Notable milestones are noted below:

April 1970 saw the first copy of the Articles of Organization for the club.

The First Annual Invitational Golf Tournament was held in 1974 at the Shangri-la resort.

In 1982 the first printed directory of membership was developed. That same year a check of $1,000.00 was provided to Oklahoma State Tech, Okmulgee, OK for their scholarship fund.

In the early-80's, monthly meetings began being held in the Petroleum Club, downtown Tulsa.

In 2011, the Young Professionals (YP) was created to promote the club to the incoming generation and those new to the industry.

Membership has grown dramatically over the past few years to over 600. We now award more than $150,000.00 annually in scholarships, funded by the club fundraising events. These events are the annual directory ad sales, monthly meetings, the annual Christmas Party, spring and fall golf tournaments, and the spring and fall sporting clay tournaments.

The Pipe Liners Club of Tulsa is dedicated to the advancement of pipeline engineering, maintenance, and operating practices for the benefit of members and the industry.

Here you can view upcoming events, create or update profile information, reserve your place for an event or dinner, and make payments.